And the Weirdest Accident Goes to…

I sprained my ankle two nights ago. Now I remove the ace bandage at the end of the day, hoping for miracles.

I’m a klutz. I have been for as long as I can remember—certainly since I walked smack into a “No Parking” sign when I was ten years old.

I’ve sprained my ankle several times before and more spectacularly. A year ago, I pulled out ligaments in my knee while dancing with my young son to—of all things—”Disco Inferno.”

The kindest interpretation is that I’m an active, fun-loving, gonzo risk-taker. The truth is more nuanced and mysterious. Because of my latest sprain, and because I also banged up the other leg while slipping on ice last week—I feel driven to pose the following questions:

Pain…terrible pain is from one of my favorite Star Trek episodes, “The Devil in the Dark,”* which involves creatures called the Horta. These lava monsters make tunnels in the rock on a mining planet, working in tandem with the humans running the operation. All is well, until they start attacking people. Kirk and Spock and the red shirts come down to the planet to figure out what’s going on.

Mr. Spock mind-melds with a horta. He lays his hands on this pulsing hunk of magma and goes into a trance, wincing, grimacing.

Two nights ago, I stood up in my office, after falling asleep while watching The Colbert Report—yes, that’s already sad—took a step towards the computer, tripped, and came down on the side of my foot.

My husband rushed in. I limped over to him, crying, “I’m OK!”

I should have put ice on the ankle instantly. Instead I walked around, trying to prove it was nothing.

The thing is, I’ve had a lot of accidents. Nothing major (knock wood), but I’m known for being clumsy and “only vaguely connected to this planet” (direct quote from husband). Once I tried to convince a friend when we were hiking down a long Cape Cod beach that I kept tripping in the sand because my feet were too small. She almost believed me.

This same friend, who recently was hospitalized for a truly strange turn of events that she’s only now recovering from, told me, “You know, Martha, I never have weird accidents like you always do.”

“Always” is strong, but one college boyfriend did like to make a point of walking on the outside when we were on a busy street, shepherding me along as if I were in constant danger of stumbling into traffic.

I’ve had countless running and biking accidents in which I end up picking gravel out of my palms. Those aren’t weird.

The only weird thing about the time I sliced open my finger while cutting up carrots at a dinner party was how unflappable I was. I just put down the knife, picked up my purse, and told the assembled, “It’s no big deal. I have to go to the Emergency Room, but I’m fine.”

Later I heard the guests hadn’t stayed. They’d said I had to be in shock; how else could I be so preternaturally calm? (Practice makes perfect.) Our horrified friends insisted my husband and son join me in the ER. I was glad to see my guys there, but we laughed about it, too, because visits like this had become so routine.

Besides, I only needed two stitches. That’s a non-accident for me.

The weirdest one in my recent history involved the little toe of my left foot. (Warning: The following story causes people to flinch involuntarily.) I was sitting on that same couch in my office, heard the phone ring, leapt up, and managed to catch my little toe on the wooden couch leg as I lurched forward and…

The webbing between my toes tore. I’m pretty sure my husband could see way too much when he looked at it.

That time, he took me. Our son was asleep upstairs when the accident happened, but the boy still claims he heard me yelling an “oops” word at the decibel level of a wounded buffalo.

Maybe he did. But the story has become something of a family tall tale. A good friend came over to stay with him while we were at the hospital, and in her telling, the little guy padded down to find her cleaning up a few drops of blood on the carpet. As he tells it, she was swabbing up gory pools of red.

Here’s the strangest connection: Because of the toe mishap, I now wear lavender Crocs around the house to protect my feet. Yet I stumbled on one of those Crocs two nights ago when I sprained my ankle.

What that proves, I don’t know, except that people like me must be accident-prone—and that, yes, there is a luscious thrill to be had in whining, in shucking one’s usual grin-and-bear-it attitude.

As for Question #3: I’ve been released today from a family outing with small children, all of whom were supposed to be getting ski lessons on an icy mountain in temperatures way below zero.

And maybe every action we take in this world is linked to another, for all time, and I am on a wheel that will somehow provide enlightenment, coming with the authority of a lightning strike. 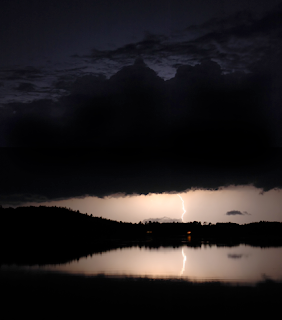 * “The Devil in the Dark” also includes the famous line from Dr. McCoy: “I’m a doctor, not a bricklayer!“