At my son’s Quaker school, Tuesday mornings begin with Meeting for Worship. The school maintains silence from 8:30 to  9:00—no ringing phones or talk in the hallways, the children gathered in their classrooms in meditative circles.

This morning, Meeting was different, though. My son’s second-grade teacher had invited parents to attend. He led the circle as John Woolman, an American Quaker from colonial times who spoke out against slavery.

The second-graders have been learning about Africa and the roots of Abolitionism, and I found this connection with Quaker history revelatory.

It’s also Election Day in Massachusetts. The Democratic primary will likely determine who gets Ted Kennedy’s Senate seat, even before the actual Special Election in January. Yet pundits say turnout will be low. Whatever you think of the man’s foibles, Kennedy’s long tenure as a Senator made a difference to working people. So what if it’s cold outside? This is New England; it’s not too cold to vote.

All right, I’m entering into pundit land myself, which brings me back to John Woolman—although not in the way you might expect. I now know that Woolman wasn’t your average political loudmouth.

My son’s teacher, Chris Hoeh, had asked parents to wear the simple garb of Quakers at the time, usually black clothing with a bit of homespun white. Some of us did, but it turns out he was wearing an off-white shirt, white pants, even a white hat.

The reason why became part of the lesson.

Chris began the Meeting with a few moments of silence, then spoke as John Woolman might have in 1772, during his last trip to England, where he died that same year. Woolman was born in New Jersey and lived there throughout his life, but he traveled widely, testifying at various Quaker Meetings about his beliefs. (Click here to find out more about Woolman.)

He not only opposed slavery—at a time when some Quakers in the American South still owned slaves—but he spoke out against the injustices suffered by the poor. Chris, speaking as Woolman, told us about his life and why he’d come to feel what he did.

He explained that although many Friends dress in dark garments so as not to glorify themselves, he had decided he could no longer wear any cloth that was dyed. The reason? The dark dye (indigo) was produced on plantations that used slaves. Chris later added in response to questions from the kids that Woolman probably wore no cotton either, only wool.

I had never realized consumer protests went back this far. Perhaps that only reveals my ignorance as a non-Quaker, but it seems few on the American protest scene—from anti-sweatshop activists to Teabaggers—know of Woolman or his quiet testimonies. 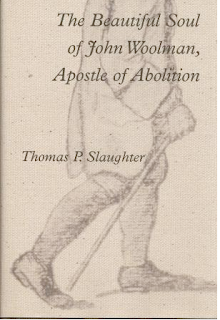 William James referred to him as a Quaker “saint.” Regardless of my uneasiness with spiritual terms and hagiographies, this wintry morning I felt illuminated by a bit of sunshine.

As a magazine writer, I’m fascinated by another tidbit: Woolman’s Journal (published after he died) is sometimes called one of the oldest American serial publications.

Once I’d headed home from the Meeting, I hit the Internet. Here’s an excerpt from 1772, after Woolman’s arrival in London, courtesy of the Street Corner Society’s online version of John Woolman’s Journal:

I have felt great distress of mind since I came on this island, on account of the members of our Society being mixed with the world in various sorts of traffic, carried on in impure channels. Great is the trade to Africa for slaves; and for the loading of these ships a great number of people are employed in their factories, among whom are many of our Society. Friends in early times refused on a religious principle to make or trade in superfluities, of which we have many testimonies on record; but for want of faithfulness, some, whose examples were of note in our Society, gave way…

I confess, I’m not a humble truth-seeker. But I feel moved to point out that this is another dangerous time for Americans, one in which it’s far too easy to give way.

The freedom to speak out in public—to “quake” with the power of one’s beliefs, even if others are opposed—is something Quakers hold dear. Woolman spoke up years before the Declaration of Independence was signed, but these days I wonder if children sometimes have a firmer grip on the truth than adults.

The second-graders asked many questions during the Meeting. They were restless by the end, but they seemed unusually attentive. Other adults were there, including the Head of the School in a black Quaker-style hat; their teacher was acting the part of somebody else, riveting in its way. I wondered how much of this my son, part of the restless contingent, was really taking in.

But one story captivated them all. Chris described a childhood incident in which Woolman saw a mother bird and her babies in a nest. As Woolman told it, all he thought about at that moment was whether he could hit the bird with a rock. So he aimed and threw high into the tree, and down came the mother bird, who then lay dead at his feet.

“What happened to the babies?” one boy asked softly.

Their teacher shook his head. “They probably…”

“They died,” the same boy said.

“Because their mother died,” my son added, not looking at me.

For my restless child, an adoptee from Vietnam, this was not an idle remark. But it wasn’t for any of the others either. In Woolman’s story, he climbed the tree to kill the baby birds quickly, knowing they wouldn’t survive without their mother, feeling terrible remorse.

No parent wants to make children feel such grief, but I welcomed this moment in a classroom of middle-class kids. This teacher was not scared of presenting the ambiguity. People can be cruel to one another, even Quakers who profess their own inner light, even children who like to throw rocks. And life itself is full of difficult-to-resolve questions.

“I have sometimes felt a necessity to stand up,” Woolman wrote a few days before he died of smallpox. He was 51.

[B]ut that spirit which is of the world hath so much prevailed in many, and the pure life of truth hath been so pressed down, that I have gone forward, not as one travelling in a road cast up and well prepared, but as a man walking through a miry place in which are stones here and there safe to step on, but so situated that, one step being taken, time is necessary to see where to step next.

For more information on Quakerism, take a look at Quaker.org and Quakerinfo.com, as well as the link to the Friends General Conference from this post’s title.

Post-election update: Martha Coakley won the Democratic primary.  Turnout was very low, as predicted. The Boston Globe‘s headline for one front-page story: “A lack of interest, time kept many away.” [12/9/09]