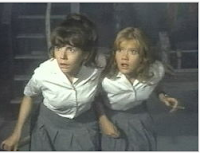 This past week, I’ve been thinking a lot about the old movie The Trouble with Angels. In a short story of mine, the main character—Miriam—dreams of Hayley Mills. In Miriam’s dream, Hayley is sorting laundry, folding railroad handkerchiefs:

“They were the kind Miriam’s father blew his nose into, then looked up from, embarrassed. It had been Hayley from The Trouble with Angels—blonde, boyish, mischievous, a girl caught smoking in a convent school, saved by Mother Superior—oh, how Miriam had longed for this as a child.”

I’ve been editing this story, wondering whether I should cut the dream. I keep polishing that paragraph, trying to convey enough information without bogging it down. Feedback from several writer friends has been mixed—what does this mean? will today’s readers even know who Hayley Mills is?—but I’m irrationally attached to Miriam’s dream. 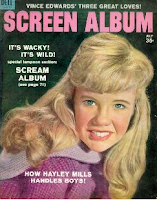 When a writer loves something too much, endlessly fiddling with it, that often means it needs to go. At least that’s my editor self talking; I’ve certainly given such advice to students. Yet, for the moment, Miriam’s dream remains.

Why? As Kate Gabrielle of Silents & Talkies writes in an April 2009 birthday ode to 63-year-old Mills:

“If you are a girl, and you were born anytime from about 1950 to the present, you probably loved Hayley Mills films when you were little…and if you’re like me, you never grew out of it.”

The Trouble with Angels is one of my all-time favorite guilty pleasures. It’s like candy canes and macaroni and cheese. It’s dumb and dated and still mildly subversive.

Most of all it’s got Mills playing against her “frilly-knickers” Disney roles—her curls are still golden, but she’s a rebel. It’s got Rosalind Russell, a toughie actress I’ll always love for not playing pretty wimps, as the sternly righteous Mother Superior. And it’s got Ida Lupino directing it, a rare feat for a woman in the early 1960s. Set in that tumble-down convent school, it’s really about the intense friendship of girls and girl culture when boys aren’t around.

Ah-ha! Like the Nancy Drew series, The Trouble with Angels might be considered a spark for young feminists. Mary Clancy, the character Mills plays, is always saying, “I’ve got the most scathingly brilliant idea!” The movie is about loss and change and growing up.

I have other reasons, too, for loving Mills and the movie, some no doubt tangled beyond my conscious understanding. (Spoiler alert for the rest of this paragraph, if it still matters after all these years.) I know that Mary’s decision to become a nun at the end of the movie felt deeply satisfying to me in the 1970s, when the convent-school setting already seemed absurdly anachronistic.

I’ve never been Catholic, but the romance of the church got to me, not to mention a girl’s commitment to faith and anything but a conventional life. A budding young writer, I felt a need for my own solitude.

That may be why the movie’s pleasures are so enduring for a certain kind of dreamy girl—just like my character Miriam the poet—who not coincidentally resembles Rachel, Mary’s goofy best friend, played by June Harding in the movie.

So here I am, back to special pleading for Miriam’s dream, wondering about how easy we fiction writers need to make our references for readers. Real life is so mysterious. How can good fiction ever be completely transparent?

The same might be asked about the destiny of a woman who was once a huge star. Her career took off with her Disney films Pollyanna and The Parent Trap—she was at her peak in 1966 with The Trouble with Angels, a non-Disney effort—and then zoomed downward with episodes of the Love Boat and three made-for-TV Parent Trap sequels in the ’80s.

For some, this plummet from worldwide fame is a cautionary tale. But perhaps it’s a more complicated script for what really happens to girls when they enter adulthood. The fact that Mills was considered for the part of Lolita in Stanley Kubrick’s film—an idea that essentially got nixed by Disney when she was under contract—seems especially symbolic.

She recently appeared in Wild at Heart, a British drama about an African wild-animal park on ITV that also starred her sister Juliet. ITV’s site describes the Hayley Mills character as the “mother of Sarah and something of a battleaxe.”

“Joan Plowright once said that you don’t need to go to a psychiatrist if you’re an actor, because you can express so many of your problems and your emotions through your work. And you really can. The theater in particular is a great discipline. You can’t stop in the middle of a play and burst into tears because the person you love has walked out on you and your life is collapsing around you, or because you’ve had bad notices. You have to get on with it. You have to draw from your deep inner resources, those strengths that keep us all alive.”

Hayley the pretty tomboy remains indelible, just as my own version of that tomboy survives in me. I first watched The Trouble with Angels on “Dialing for Dollars,” a Bay Area TV station’s old afternoon movie show. Decades later, I watched it on a big screen at the Brattle Theatre in Cambridge, Massachusetts, during an Ida Lupino retrospective.

I now own the DVD. I’ll always call the movie’s vision of girlhood scathingly brilliant. And by the way: We don’t grow up to be battleaxes.