A local news story has reanimated a guilty fantasy of mine: throw away the rules, max out the credit card at a fancy hotel, damn the consequences.

According to the Boston Globe‘s “‘Perfect Inn Guests” Swindled Proprietors, Police Say,” Jane and Benjamin Wolff have been caught and arraigned “on charges of defrauding an innkeeper” after staying in a series of tourist hotels. They allegedly ran up big bills—such as $3,600 at the Hawthorne Inn in Concord for 19 days—then split without paying:

“They lingered over breakfast, raving about the homemade granola and chatting amiably with other guests at the richly appointed 19th-century bed-and-breakfast. They kept their room spotless, whiled away afternoons over books and brownies, and entertained their hosts with amusing stories.”

“They seemed like your grandparents,” another innkeeper is quoted in the Globe. This week the local Fox News station hyped the victimization of these trusting B-and-B owners and ran footage of the Wolffs in court. 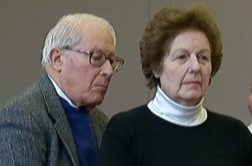 The Globe notes that the “reasons such a couple would go to those lengths…have so far eluded authorities.” The story points out that Jane Wolff filed for bankruptcy in 2005.

I can think of lots of motivations for this scam, from skilled con artistry to desperation. If you made the movie, you could portray the Wolffs as schemers (Marlon Brando and Joan Collins) or as dreamers on a spree before getting free room and board in jail (Dustin Hoffman and Shirley MacLaine). One person calls them “an elderly Bonnie and Clyde.”

“At this point, they are homeless people knowingly breaking the law,” a Concord police detective told a TV news reporter. “They do have family. It’s just an odd case.”

I see 79-year-old Benjamin’s hunched back and stiff movements in the courtroom, and I wonder about why they might feel estranged from their family. The Wolffs are my parents’ age, and if my mom and dad weren’t so ill, I can imagine them saying, what the heck, let’s live high off the hog for a few days.

The TV news reports present their departure from the usual roles played by “sweet” seniors as disturbing and titillating. The lack of a clear-cut explanation seems to make everyone nervous. So far, the reports don’t contain quotes from the Wolffs—just shots of Jane hurrying away from a thrusting microphone—although a piece from another local paper notes that Jane’s son decided not to to pay the money they owe; apparently they’ve been pulling such stunts for years.

A salon owner in Newburyport who got stuck with two bad checks laughs and says, “They are a team.”

So the perfect guests are probably schemers. But it does give me a little thrill that the couple managed to fool innkeepers who often charge more than $200 a night. Benjamin claimed to be a doctor who “worked at home,” as well as a Goldman Sachs executive who was just waiting for a $20 million bank transfer.

And the story—which ran on the Globe‘s front page—got me wondering where I’d go if my life became a financial and emotional train wreck.

The dreamer in me has to admit that I’ve thought about starting life fresh with a new identity. Well, not really thought about it in a premeditated way, such as figuring out the logistics and calling some friend of a friend to help me with getting fake ID. I’m basing this on mystery novels now and also qualifying wildly, because in no way do I truly want to take a powder and leave everybody I know to become a river-boat gambling queen or a waitress in Key West.

Yet years ago, when I read Anne Tyler’s Ladder of Years, before I even had a child, it did give me another kind of vicarious thrill.

In that novel, during a low-rent beach vacation, a mother just decides to walk away from the house and become somebody else—somebody free of the demands of squabbling, irritating others. As Cathleen Schine writes in her 1995 review of the book in the New York Times:

“If the reader is never quite sure why Delia deserts her life, neither is Delia herself. All she can say to explain herself when her family finally tracks her down is, ‘I’m here because I just like the thought of beginning again from scratch.'”

Shocking as it may seem, I’ve felt overwhelmed by laundry and arguments over ice cream cones and one too many episodes of Teenage Mutant Ninja Turtles. My husband is a total mensch and gorgeous guy, but we butt heads on occasion. I’ve also quietly steamed over long-time conflicts with other family members whom I’ll just call “difficult.”

I’d like to say that the fantasy has me traveling the world, flirting with dangerous people or descending into a racy alternate existence. Call this the Don Draper approach in Mad Men. But I’m more captivated by the thought of solitude. I’m a hermit in a cottage on a rugged seacoast, scribbling in my notebooks, accepting the simple gifts of food and drink brought by villagers because of my renowned wisdom.

Or for a few seconds, I’d like to be the perfect guest—the person who’s a cipher, who you can never get too intimate with‚ pampered by luxe sheets and complimentary brownies.

Of course, Don Draper’s multiple identities don’t make him happier. And Delia of Ladder of Years discovers that she can’t escape herself. She establishes a new identity in a new town, but soon enough new people are relying on her.

We parents may fantasize about escape, but most of us are wired to care for others. But, oh, to have a night or two in the Musketaquid Room room of the Hawthorne Inn, with the free videos and breakfasts. Here’s a description of the room from the inn’s website:

“Sunrise filters through a sieve of ancient maple boughs and breaches the bay window sill; a new morning embraces you. The flood of warmth charges the room with a glow of burnt umber, sienna and rust as walls and carpets and the burnished wood of antiques awaken.”

What was that about carpe diem?

This piece has been cross-posted on Open Salon.