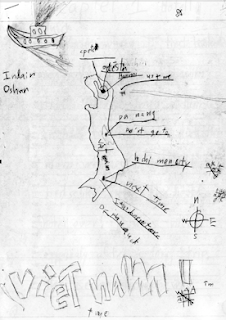 I’ve just completed an assignment that has starkly revealed how little I know about “bedrock” reality.

Before going into detail, I’ll put it to you: What would you write if you were asked to describe the geography of the United States? What kind of map would you draw?

I’ve been challenged by this in the past few weeks, and so, coincidentally, has my seven-year-old son.

In my Vietnamese class, my fellow students and I first translated a narrative titled “Địa lý Việt Nam” (“The Geography of Vietnam”). This essay included sections on “Núi và cao nguyên” (mountains and highlands), “Sông” (rivers), and “Biển và bờ biển” (oceans and coastline). Each section contained several densely packed paragraphs of Vietnamese, detailing facts like the highest point in Vietnam (Mount Fansipan) and the length in kilometers of various rivers, including sông Cửu Long (the Mekong).

In class and at home, I pored over a map of Vietnam in Vietnamese, split between two modes: learning the facts of the landscape and a different way of expressing those facts. I found it fascinating and mind-twisting.

I’ve always been good at reading maps, but here even places in Vietnam that I had visited needed to be rediscovered. The reframing of place names, provinces, and borders in another language seemed an apt metaphor for viewing the land through a different cultural lens.

Yet I didn’t expect such mental twists in viewing my own country. Our next assignment was to write an essay about U.S. geography. I thought this would be a snap at first, until I slammed up against my ignorance of information like the length of the Mississippi River.

Wikipedia (there’s a joke in this link) and a variety of websites became my friend. But the real twist came in expressing direction and geographical formation in Vietnamese. My ignorance of the facts I thought I knew—what are the tributaries of the Mississippi, for example? Where does the Columbia originate?—made me feel I’d suddenly just landed on American shores, scratching my head.

One small example: directions such as northwest or southeast in English are reversed in Vietnamese—that is, tây bắc (or “westnorth”). This is easy enough to get used to, but it does also involve a perceptual shift in how one moves in physical space. The Southwest, for instance, is referred to as “miền Tây Nam” (“area West South”).

Meanwhile, unknown to me until I attended a potluck breakfast in my son’s second-grade class, he had drawn his own map of Vietnam, complete with illustrations of a compass and a ship. There’s a thumbnail of it at the top of the post, but you might not be able to make out Nick’s personal labels for places. Under “Hannoi,” he inserted “us + me”; under “Da nang” he put “didn’t go to”; and with “ho chi men city,” he wrote “I was born here” and “next time.”

Nick’s map is accompanied by a story. “Chapter 1 Hotel!!” begins this way: “In Hanoi when I first looked at my hotel it was great with Ho Chi Minh’s sayings as famous as MLK to Vietnam.” In the second chapter (“Me!”), he writes, “Mom said that we would go to the market place. Vendors were selling everything from fish to…well sea food.”

My husband and I were delighted to see his map and to read the story, of course. But it also brought home to me how personal one’s sense of location in the physical world is. In Nick’s case, after one visit to Vietnam a year ago, he can recreate that geography and label the places that matter to him far more vividly than he can the landscape of where he lives in Massachusetts.

I don’t mean that he cares more for his birth country, although I think he’d say that he does. He is also quite rooted in our corner of Cambridge, the streets of our neighborhood that we often walk to school, the collection of shops a few blocks from our house. It’s possible to live many places in your mind and heart, and I see his map of Vietnam as so much more than a geographically correct drawing.

As for my geographical correctness, I muffed the verbal description of oceans around the U.S. that I gave in class. When asked why the oceans are important, I basically said the equivalent of “they have everything from fish to…well, uh, seafood.”

On the written essay, I scraped through with a B-minus, which is starting to look like a good grade to me. My inability to get top marks, even if I study for hours, is another mind-twist: my old assumption that if I just work hard enough, I’ll succeed just doesn’t cut it in this class. My new map of the world has dragons and demons on the borders, and includes the possibility of falling right off the edge into the unknown.

The funny thing is, I’ve felt an odd burden lift from me, a weight I hadn’t even realized I carried. All the shifts in perspective have made me see that my internal topography is changing all the time. I think even a year ago, I might have found this a scary thought, one that required maximum mental fortifications. But just as a map of a country like Vietnam isn’t static, it doesn’t make sense to take the bedrock of me for granted, either.

I’ve discovered that my knowledge of geography is thoroughly embedded in personal experience: my old wood-block map puzzle of the United States from childhood; the many times on family car trips that we crisscrossed the flat agricultural lands of the Central Valley to the Sierra Nevada mountains; the bike trails I’ve traversed repeatedly in Acadia National Park in Maine. I used to run along the trail from Inspiration Point in Tilden Park, so my memory of the spine of hills that separates Berkeley and the East Bay from the Delta isn’t just visual; it’s in my feet.

The borders of my map might jump from a floating turkey vulture above Tilden to the buzz of a hummingbird off the trail, from the traffic jams of Saigon to late fall in New England. If I drew a map of all these places—as Nick drew his of Vietnam—I’d label everywhere I’ve been and where I want to go, including the mysterious edges I can’t know.