I finally saw The Last Airbender Friday with my eight-year-old son, several of his friends, a brilliant twelve-year-old girl, and accompanying adults. What can you say about a movie in which the title character, after announcing he must meditate to save the moon spirit, is then badgered by a weepy sidekick:

Aang, are you there? Are you meditating? Sorry to bother you, but I need to emote enough to let the audience know this is IMPORTANT.

I left the theater feeling jangled, as if somebody had spit up on me. As one of my fellow adult sufferers, a scriptwriter, described the waterbending special effects: “Yuk. Death by spit and icicles.”

The reason I care at all is that M. Night Shyamalan’s latest travesty reveals the contempt producers, studio executives, and every variety of rainmaker have for good writing. Call them the Moneybending Tribe, because money is what animates their zombie hearts; it’s been true since the birth of motion pictures.

I can be as cynical as the next disappointed writer about the nature of Hollywood. Just once, though, I’d like to shake my idealistic fist at the blood-red sky. A fan of the original Nickelodeon cartoon series on which the movie is based, here I make my stand as the Last Wordbender. 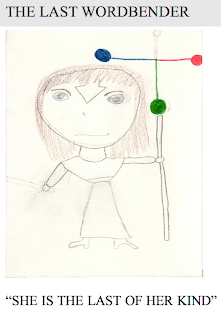 Few mainstream movie critics seem to have watched the cartoons, and many of their reviews sound the same (how many synonyms are there for “awful”?). I can’t add much to the consensus, but my review indicates what at least some kids—the target audience—think. And I can point to what Shyamalan left out, illustrating the bad, bad writing underpinning everything else.

On that Friday afternoon, our group was the only one in the theater. Granted, it was a 2-D showing, but regardless of Airbender‘s decent opening-weekend numbers, I doubt this franchise will have the mojo of Harry Potter. (Word on the street is that Airbender ticket sales dropped 57% its second weekend.)

The response of the young kids in our party was mixed. Six of them sat in a row behind us moms, and they were clearly fired up by the fight scenes and the visual-sonic overload. Yet they were also unusually quiet during long stretches; at several points they seemed to be giggling for the wrong reasons.

When I took a poll afterwards, some of the kids said the movie was “bad,” others said “awesome.” But while they had a hard time pinpointing what they liked, these cartoon fans were clear about what they didn’t. They complained about all the characters, including Aang, the 12-year-old monk-savior; Aang’s flying sky bison, Appa; and Prince Zuko, outcast son of the evil Fire Lord. Their comments home in on why the storytelling is so weak:

“There were no Kyoshi Warriors.”

“Aang was just standing there. It’s as if World War Two is happening behind him, and Aang looks away and says, ‘ooh, there’s a butterfly!'”

By good writing, I mean everything that makes a story compelling: dramatic tension, pacing, character development. Yet we wordbenders (and in truth, I’m but an apprentice) do not require literary gems. Jurassic Park is not a great film, but it is great entertainment. What really matters in this kind of movie is a story that gets viewers to suspend disbelief for an hour or three.

In this case, Shyamalan had an amazing wealth of imaginative scenes to draw on from the cartoons. Any writer would have to pick and choose, but his choices indicate what a fake he is. He’s like the face-stealing Koh in the spirit world, pouncing if you show any emotion, twisting your features in parody.

The face-stealing evil spirit is not in the live-action movie, of course. Instead we get a dragon who sounds like a psychotherapist. The above-named Kyoshi Warriors, dazzling samurai warrior girls, are also gone.

One of the worst omissions involves Katara, the movie’s weepy sidekick. In the cartoon series, when the heroes arrive at the North Pole, they meet Pakku, a waterbending master who refuses to train Katara because she’s a girl. The feisty cartoon heroine doesn’t accept that she can use her waterbending powers only for healing. She takes on Pakku, challenging him to a fight.

In the movie? Gone.

I’ve written before about the whitewashing of main roles in Airbender. The movie is such a wreck other reviewers have tended to dismiss the concerns of fans, be they about racial casting choices, dilution of the tough-girl heroes, or other changes to the cartoon world. Richard Corliss of Time quips:

“You can relax, bloggers. The dearth of racially appropriate casting in the U.S. simply means that fewer Asians were humiliated by appearing in what is surely the worst botch of a fantasy epic since Ralph Bakshi’s animated desecration of The Lord of the Rings back in 1978. The actors who didn’t get to be in The Last Airbender are like the passengers who arrived too late to catch the final flight of the Hindenburg.”

This is funny, but it misses the point of the protests by Racebending.com and others, which have been going on for over a year, not the “few weeks” Corliss notes. The casting choices do matter, even in a bad movie. If nothing else, they indicate the intellectual bankruptness of the people in charge.

By the movie’s final battle, I couldn’t help myself from imitating Aasif Mandvi’s Bela Lugosi-like hand movements. I think Mandvi on The Daily Show is a hoot, but he’s yet another benighted casting choice as Commander Zhao. Screenwriting 101:  If a villain has no gravitas, it’s hard to work up much fear or knuckle-biting.

The brilliant twelve-year-old (the scriptwriter’s daughter) thought Dev Patel as Prince Zuko could have been “an MIT nerd who hasn’t slept all night.” In the cartoon, Zuko has a livid scar that disfigures his face, the visible proof of his father’s hatred. As my son says, it’s “the main part of him.” In the movie? This essential marker is barely noticeable, sort of like a spray of acne scars.

A few set scenes—Aang with his glider diving through the air; Aang, his eyes glowing with spirit power before a tidal wave—show what this movie series could have been and may still be if another director and writer are at the helm.

But I’m afraid the first installment has already killed the joie de vivre that was so much a part of the cartoon series’ appeal. Another mom, who liked the movie much better than I did, still told me she missed one beautifully animated image at the end of many of the cartoon episodes: the teen heroes and Appa flying away into the heavens, silhouetted against a full moon.

The movie evokes none of the sparkle of kids on an adventure. Think about any Hayao Miyazaki film—Kiki’s Delivery Service, for example—to see the great big void of fun and mystery in Shyamalan Land, where his young heroes earnestly stop in small towns along the way to foment rebellion.

On learning from his airbending masters that he is the “Avatar”—basically the Dalai Lama—the movie Aang says he ran away because the monks told him he could never have a family. But this is adult reasoning (or maybe just a steal from Star Wars). In the cartoon series, it’s enough for this twelve-year-old that a bunch of adults have told him he’s supposed to save the world. What kid wouldn’t want to bury himself in an iceberg for a hundred years?

My fellow wordbender, the scriptwriter, turned to me at one point and whispered, “I think this is the worst movie I have seen in my entire life.”

I said, “Well, not the worst…I can think of worse.”

That’s the real problem. If I could just write off Shyamalan as a latter-day Ed Wood given too much power and money to play with, then I’d quietly put the lid on this load of trash. But before the movie, we watched a preview for Alpha and Omega, about how a nerd wolf and an alpha-girl wolf meet cute. Even the standard CGI animation looks tacky.

Maybe we’ve just hit the end of the road and we’re sinking into barbarism; Thunderdome is on the horizon. But after seeing too many crummy trailers intended for children, I can’t help feeling that the world of imagination, the world of fictional characters with whom we can identify—and with whom we learn to develop empathy—has become a very impoverished place.

Note to Hollywood: That’s a loss, dudes. One heck of a loss.

The “Wordbender” drawing is by my son and used with his permission. Thanks to the children I interviewed and their pithy comments—and “the scriptwriter,” who urged me to write this review, even though I am heartily sick of The Last Airbender and M. Night Shyamalan.