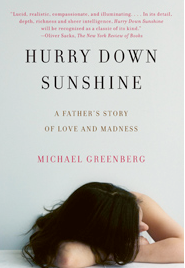 So much in this 2008 memoir is wise, beautiful, and scary. But what strikes me most is Greenberg’s description of what happened when he finally went back to work, after his daughter Sally came home from the hospital.

He hadn’t been in his rented workspace or looked at the manuscript of his latest novel for weeks. He started editing it in almost a fugue himself. After Sally’s experiences on a psych ward, he thought his first-person narrator was too “melodramatic, overromantic…too desperate for love”:

“With pencil in hand, I find myself eradicating his voice—eradicating the offending ‘I’—and replacing it with a third-person narrator, omniscient and bloodless…. Any whisper of chaos that I come across in the narrative is surgically removed…. It’s as if my aim is to neuter the book, to relieve it of feeling itself.”

Oh my God. Of course! Of course this father felt the need to run from his own feelings, to ease the emotional storm he saw in his daughter. He both identified with the storm and felt guilty about it.

How much havoc can a mentally ill family member wreak on the creativity of others? How much can another’s manic energy drain the life from one’s writing voice?

It can do a lifetime of quiet damage. I know.

I’ve struggled with this for years—not to mention the family injunction against talking about it—so much so that, even now, I feel guilty referring to my own experience. It doesn’t matter how vague I’m being here about which family member of mine is crazy; the guilt comes down, the editor who so sternly wants to deny what’s wrong.

Greenberg’s account of one terrible summer in broiling New York City and being confronted suddenly with a wild-eyed stranger—his daughter—who proclaims everyone a genius brings it all back home. The extremity of her emotion sucks up everyone else’s air.

In my own work, I can control the editor sometimes, but she’s always sitting on my shoulder, doing her own version of neutering.

All my fictional characters start off angry; it’s the emotion that animates most of the action, and it’s too one note. But in my nonfiction, anger rarely surfaces. My sadness does, yes, and my longing, but the closest I get is sarcasm, a veiled rage that tends to keep readers safely away from the real flames.

I’m not sure whether to thank Michael Greenberg—no, I do thank him. Every once in awhile I dive into memoirs about mental illness, and I emerge into a world in which I feel both relieved—I’m not the only one who’s had to deal with this—and the kind of fear that’s the biggest self-censor of all.

Towards the end of Hurry Down Sunshine, Greenberg talks about how worried they were about his daughter going back to school. As that first day in September approached, Sally was the most worried of all. He and his wife advised her not to tell any other students what happened, because “[p]eople won’t understand.”

“But am I right about this?” Greenberg asks himself. “Is it really better for Sally to conceal what happened? It may not be possible. And what of the burden such a secret will place on her?”

Knee-jerk secrecy becomes a burden for all involved. He’s right to ask those questions, and the resulting book is a testament to what it means to release the grip of something so corrosive.

I’ve long felt that I couldn’t write about people I know in hurtful ways. Yet I’m coming to realize that the privacy of others isn’t the only ethical consideration.

I’ve always thought that my desire to be honest with my son about his adoption, for instance, was rooted in the conventional wisdom about what’s good for adoptees. But maybe my determination has been sparked by something more fundamental—my need to rebel against an older family story that has sometimes kept me muzzled.

It takes so much effort to hide the damage. I won’t say I’m in full-scale rebellion now, but I’m trying to reclaim my voice. I’m telling that she-devil editor, who says I have no right, to back off. It’s my story, too.